Today is Sunday. A week ago, we were leaving Abingdon in a taxi in the rain on our way to Heathrow. What a lot has happened in that week.

Whilst we had lunch today, I asked the girls for their marks out of 10 for the week. The overall was 7.

Here is their assessment.

Things that were 10 out of 10 were the bread at the guest house. It is soft and thick and lovely and not too sweet (unlike the shop bread we can get here.) Chicken (to eat) also gets 10 out of 10.

Meeting W and A also rates 10 out of 10. They are the children of the managers of the guest house which is attached to the hospital. They are 10 and 8 years old, and are home schooled in the morning, and play outside in the afternoons, climbing trees, making a tree house, fishing in the river, building a zip wire and a bike track. Miss A has joined them, and delights in the freedom and in running fast. Yesterday in the forest, they tried (unsuccessfully) to catch butterflies together with a length of old mosquito net as a butterfly net. Little Roo tries to keep up, and it tires her out!

Finding a chameleon was also a 10 out of 10. It was emerald green and just sitting on the track as I walked by, juddering backwards and forwards, and rolling its eyes around. We brought it home and it joined in card games and lego for the afternoon sitting on Miss A’s fingers, until we took pity on it and took it back to the wild. We placed it on a leaf, and it changed colour, one side brown with a yellow stripe, the other still green, but with a red stripe, as it camouflaged itself into the foliage and disappeared. According to miss, A, putting it back was a 1 out of 10. 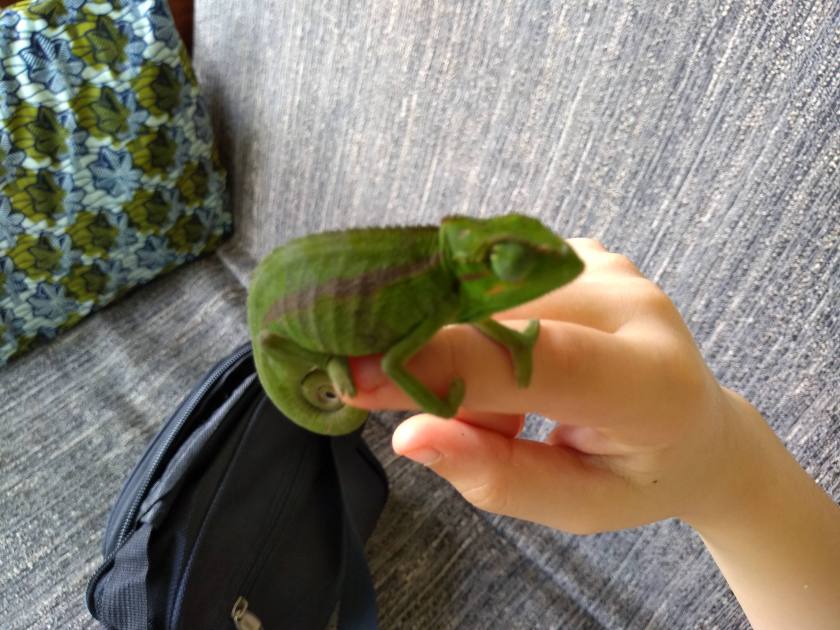 Other low-lights of the week have been, having a bucket shower, rated about 3 out of 10 ( it would have been a 1 if the water was cold), and being sick after eating samosas on the first morning was probably 1 also.

I’d say my own week comes in at a steady 8+. The welcome and conviviality have been superb, and Zishan, the GP preceding me, has been the best mentor, friend, guide, one could ever hope for.