Sunday is my only day off in the week. To compensate, I am entitled to 5 days off in a row every month or so. So for now at least, I am working a six day a week. And the week has been full of new things to learn and has felt quite long.

I was delighted when Sunday came. I still woke at 7:15 when the lady came with the milk (pretty much straight from the cow, maybe watered down a little.) It is still quite dark here at 7 in the morning as the hills are high and the sun has to be high to break over the tops. For one day in the week we can wander around in our pyjamas, at least until showers are done. Showers are a palaver. We have a bucket which we fill using water heated in our kettle, and power with a little camping shower. It’s a bit chilly as we are in the rainy season and the floor of the bathroom (and the rest of the house as well) is concrete. It is fair to say that it is the low-light of the girl’s week.

We decided to go to the National Park at the edge of the village to do a short walk in the forest. The rules here are that you can only do a short walk unaccompanied. Because we are very near the border with Congo and because of the gorillas, any walks deeper in the forest have to be with an armed guard. Unfortunately, the park ranger told us that the short walk was ‘’not possible’’ today. Perhaps we would like to spend 70 dollars and take a guide instead? We politely declined and went home, a bit gloomy. Only to find our verandah and the surrounding trees full of red tail monkeys. What glorious creatures! They played on the car, lounging on the warm roof, looking at themselves in the wing mirrors, sliding down the front windscreen. Then when they had had enough, they swung from the electricity cables and into the trees. And then they spotted our open doorway and open windows and the ripe fruit inside…. The different animals really had different temperaments, some willing to come right up to our doorstep to take a fruit, others more wary. The red tails have white heart shaped noses and rusty red tails which they hold in beautiful question marks when they are on all fours. It is quite something to look straight into the eyes of another primate at such close quarters, and to almost see that it is thinking and planning. 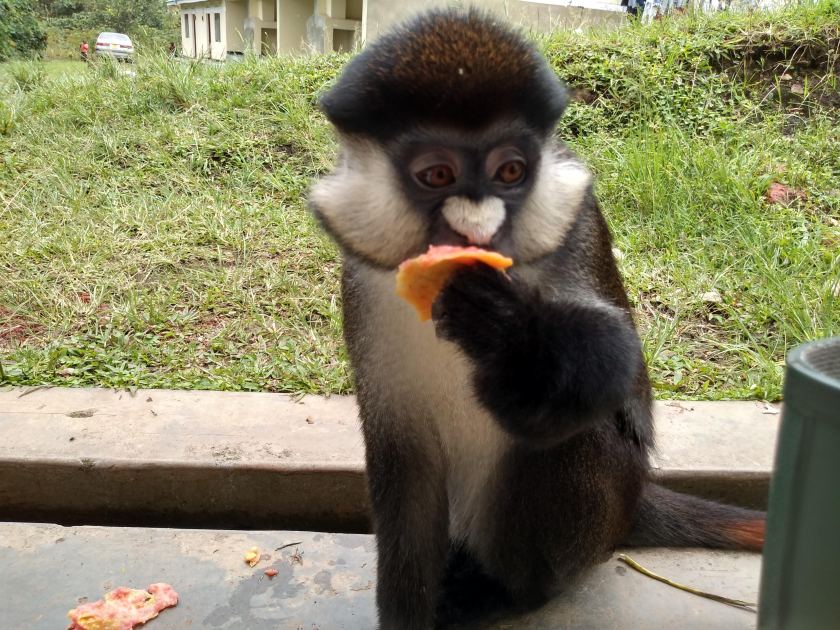 After playing with monkeys, and then playing outside with the children around us, we decided to walk along the river just next to our house. The river comes out of the impenetrable forest about a mile away, and tumbles down in pools and small waterfalls. It is incredibly beautiful. The vegetation is so lush. Things grow and grow, tumbled one upon another, and on the vegetation are bugs and butterflies of such variety. Butterflies that are white with black underwings, others with markings like swirls of ice-cream, dragon flies, assassin bugs. We were caught out by the rain and took shelter under a tree with only a small umbrella to protect us from the deluge. The girls sang the Ugandan national anthem to keep their spirits up whilst people herded goats past us and looked with amusement at the huddle of damp English people who couldn’t cope with the rain. We had a fantastic walk, and on the way back, a group of Batwa ladies and assorted children joined us. 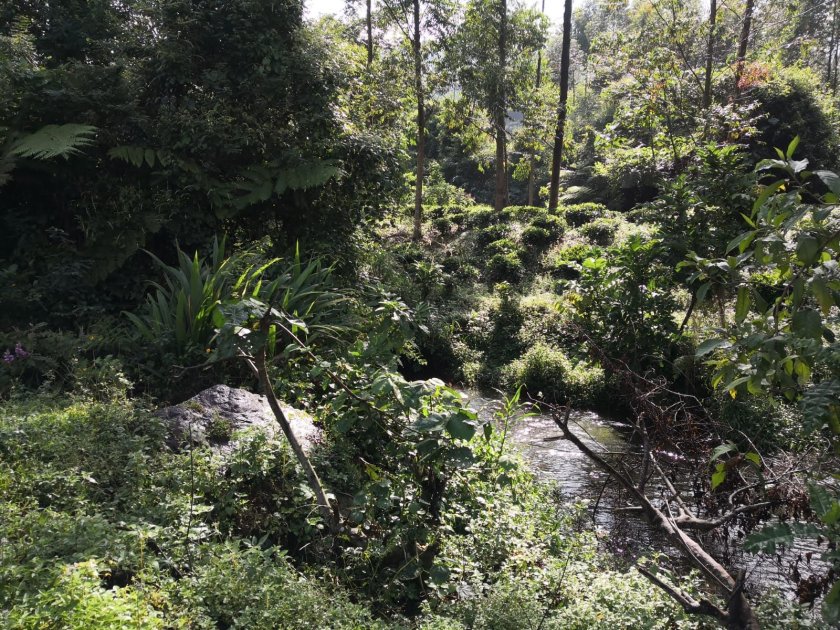 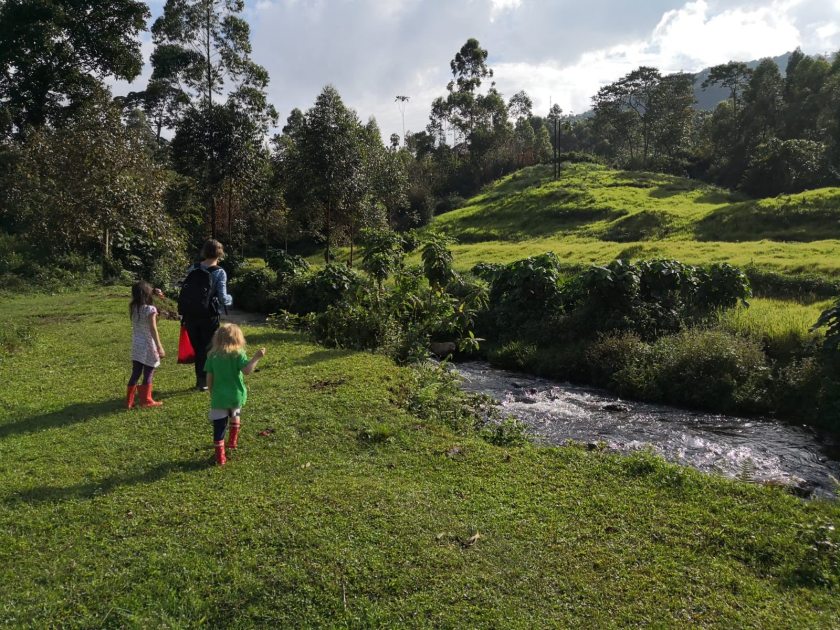 The Batwa are the traditional forest dwellers of the central African region whose lifestyle was one of hunting and gathering in the resource-rich forest. They were evicted from the forest when the forest was gazetted as a national park in the early 1990s. There are about 6000 in the region as a whole. They are of small stature. They suffer lots of discrimination and the hardships that accompanying displaced indigenous populations all over the world (alcoholism, lack of employment opportunities, generally poor educational attainment, lack of secure land tenure, even poorer health outcomes than their surrounding neighbours.) In fact, our hospital was started as a health clinic to meet the needs of the Batwa. Sadly now, the most lucrative income for the Batwa is to dance for the tourists. It feels sad and unjust and ironic that their income is at the beck and call of visitors who come to see the ‘’pristine wilderness’’ which was actually their home, their larder and their spiritual base.
I was walking with a feisty woman called Truth. Her English was pretty good – I presume from all her contact with tourists. She told me she has five children, but ‘’ I don’t want family planning, I  just want some more.’’ She wants seven children. She had her first when she was 15 and she was still at school. She completed primary only. She told me, ‘’ but now I am married.’’ Her husband is good to her, she says. She is 28. 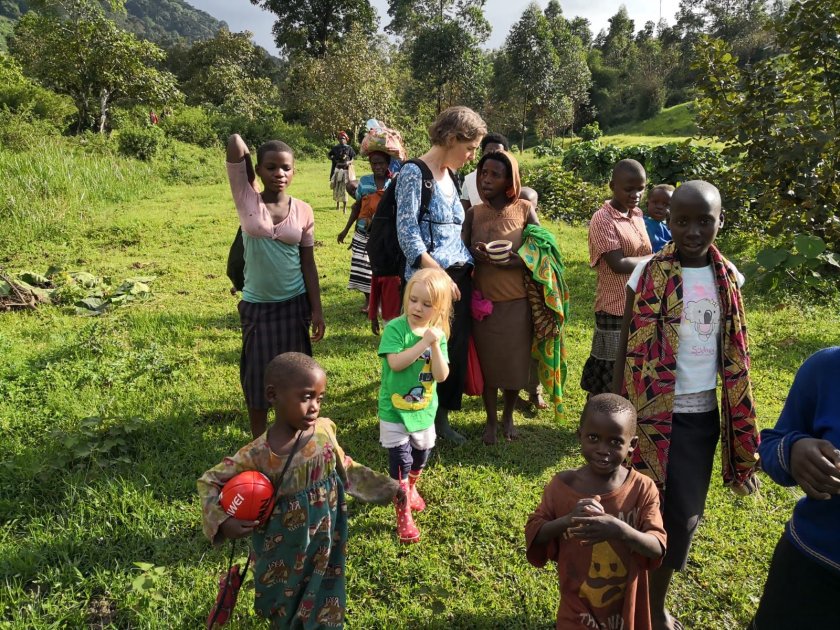 One thought on “Sunday”