As our time here draws to a close, I am trying to think of the very best and the very worst things that we have encountered during our time here. With so much glorious nature and biodiversity around us, it would be easy to look in the natural world to find the best and the worst. And yes, we have encountered the magnificent and the destructive in the nature here. But my outlook here has been very much focused on the human world, so it is there that I look for the very best, and the very worst.

So, here is almost the very worst that I have seen here.

Nothing had prepared me to see the patient. I was handed her chart before we went into the room that she has been assigned, on the private ward where she could be kept in isolation away from the risks of infection. The first sensation was of the smell. The smell was of rotten flesh. The next sensation was the stillness. The patient was a young teenager, sitting on the edge of the bed, stiffly, as if cast in lead. Her sister was with her, holding a newborn baby swaddled in a blanket. Everyone was still like a tableau.

I looked more closely at the patient. She was stiff because she couldn’t move. Her chest was burnt from her neck to her waist, over her breasts, and under her arms. Her skin had been replaced by a stiff eschar***, rigid like armor and broken into plates, separated by oozy, sticky under-skin. Old burnt skin clung around her neck like rolls of molten plastic. Her nipples had been completely burnt off, and the tissue underneath was extruding through the spaces like cake mixture squeezing through a funnel.  Her breast milk was pouring onto her chest. It was truly horrifying. I did not know what to say, or what to think. At that moment, the baby started crying. It’s caretaker quickly made up some formula, and fed it to the baby in a spouty cup. The baby settled and gnawed on her hands. It was then that I noticed just how huge her head was, how large her eyes, and how absolutely tiny were here fingers. Baby was not getting enough to eat.

Here is the story. I have her permission to share it. The girl was married, the second wife to her polygamous husband. This baby was her first child. She had delivered her baby at a health facility, and had returned home a few days later. Something upset her when she reached home, and she and her husband argued. As her anger increased, so she began to have a fit. She had had seizures before, often when she was upset, but had never sought treatment. Why should she ? She knew they happened because she was bewitched since she had run away from home as a child when her father re-married. Her life had been blighted by these convulsions since then. They were a marker of her father’s dissatisfaction with her. This time she had been cooking when she was arguing with her husband, and as she lost consciousness, she fell onto her cooking stove. One of the children around pulled her away, and put out the fire in her clothing. The baby had been on her back, and hadn’t been affected.

She had gone to another health facility for a few days where her wounds had been dressed, but they had run out of dressings, so she came to our hospital instead when her skin started to stink, and she was getting worse, rather than better, at risk of sepsis and at high risk of dying. Being unable to feed her baby, it had lost very large amounts of weight, and was clearly malnourished by the time mum and baby presented to our hospital.

I left the room after that first review, and with my nurse colleague, we both could hardly speak. I felt as if I had been thumped in the chest. How, how could the situation have come to that stage? That this young lady might well die, and her baby was clearly struggling to cling to life, and nothing had been done about a simple treatable condition such as epilepsy because of how her illness was understood, and communicated to her. The weight of unchangeable forces felt so heavily on her shoulders.

What does this terrible story tell me? That models of understanding of health and disease that are widespread in the community here can be so destructive to a person’s health. That family bonds and family expectations are so potent that a parent’s disapproval can blight a woman’s life for all the years that remain. That some health facilities around are so poorly stocked and staffed that they don’t even have gauze to bandage a patient, that a baby who can’t breastfeed faces a huge challenge if it is to survive the first six months of life here.

If this is something of the worst, here is some of the best. The doctors and nurses who care for patients here. Over the course of many weeks, the nurses have tended to our patient’s burns with meticulous care. Her burns were so severe at first that she had to be given a general anaesthetic for the dressings to be changed. Painstakingly, my Ugandan colleagues have grafted new skin onto the most deeply burnt areas, slowly, slowly, the skin is healing. The nurses have washed her, cared for her huge compassion. When her caretaker was called back to the family, the patient worried she too would have to go home, because who else could look after the baby (she still couldn’t hold her baby by herself at that stage) . The hospital stepped in, and appointed one of the ancillary staff to care for the baby and for the patient’s personal needs. She was started on anti-epileptic medication and counselled about the nature of the attacks that overcome her. She’s started some physical therapy to help her move her stiff contracted scarred skin. Baby has had a nutritional review and is being supported to feed and now is gaining weight. It may be that in a few more weeks, she will indeed be well enough to go home. There is reason to be hopeful. 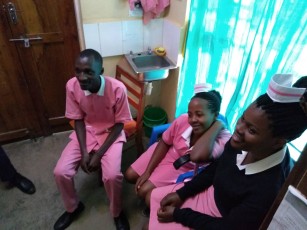 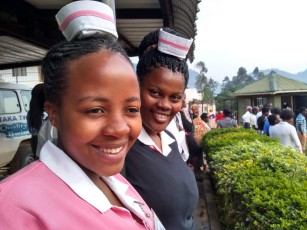 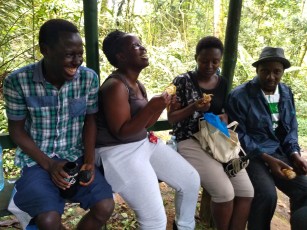 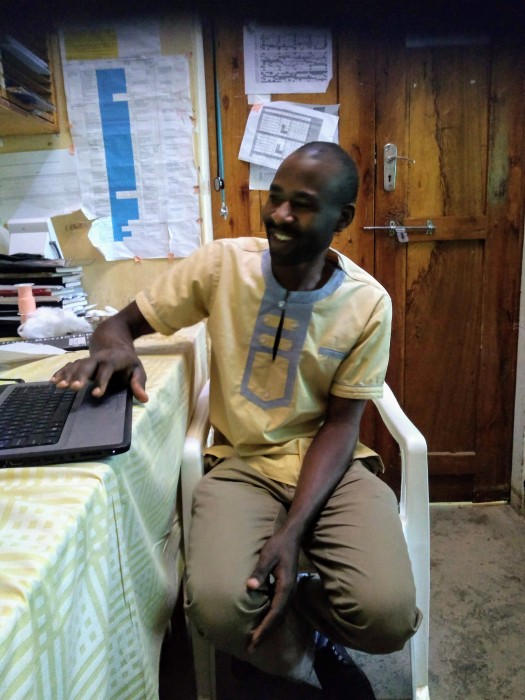 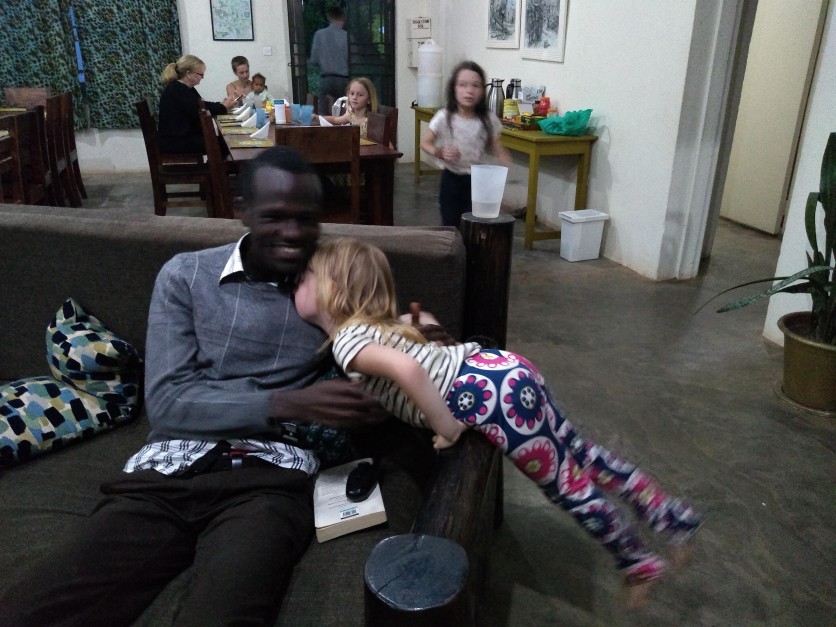 There is so much pain and so much goodness in each day here, so much that is worse than you could start to imagine. And yet there is so much compassion and kindness, and smiling and joy. That has to be the very, very best of things. 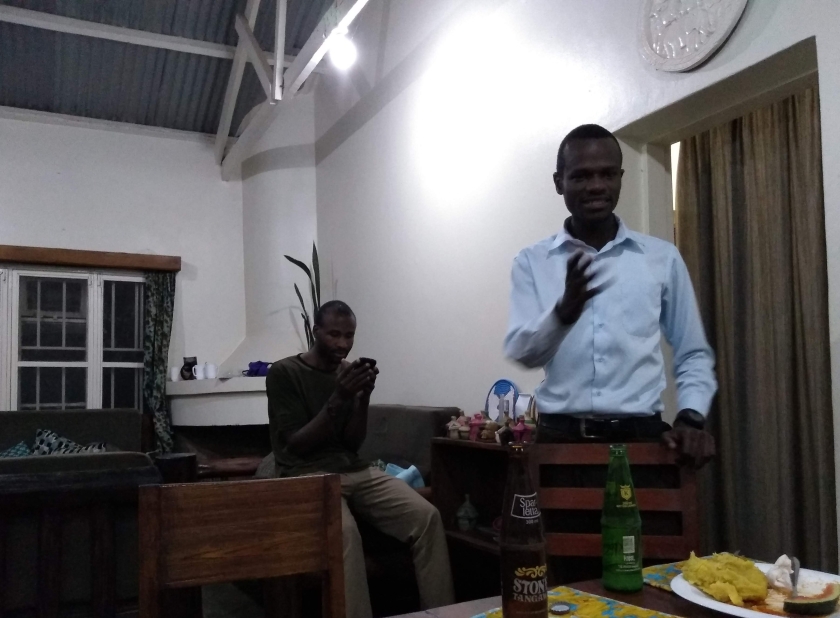 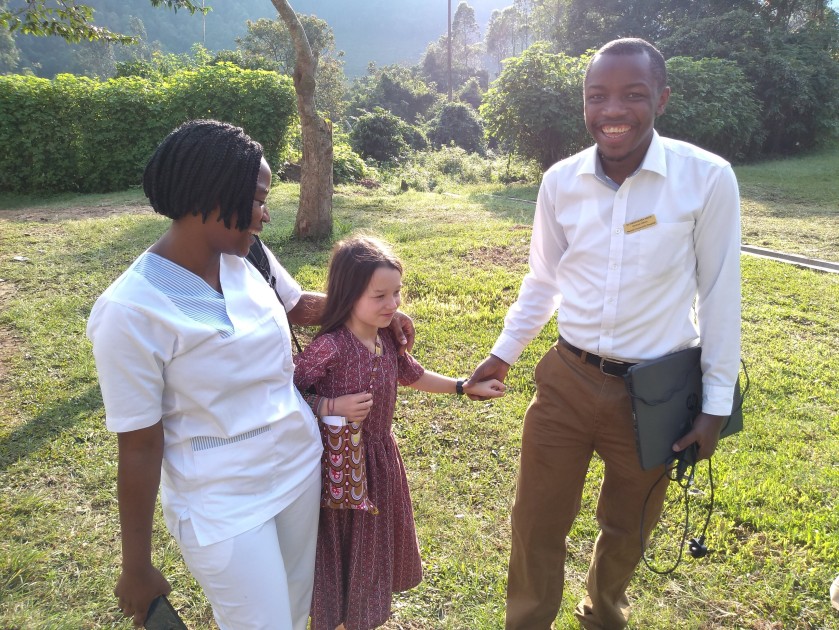 I’ll leave you with something of the best of nature after all. On the way back from our holiday, we took my favourite road of all. It’s the road from Kasese to home that runs through Queen Elizabeth National Park. The whole road shimmered with butterflies, for the two hours that we drove, there were butterflies and more butterflies and more butterlies. The air was full of them. It was like driving through falling blossom. This was one of the most beautiful experiences of my life.

Here’s a picture of one of them (a forest caper white for those interested), and the open road. I wish I could post a video, but I can’t!